Personnel may be scarce at the currently closed National Museum of the U.S. Air Force at Wright-Patterson Air Force Base, but that didn’t stop one innovative hero from employing some arts and crafts merrymaking under a section of wall devoted to the United States Space Force chain of command. 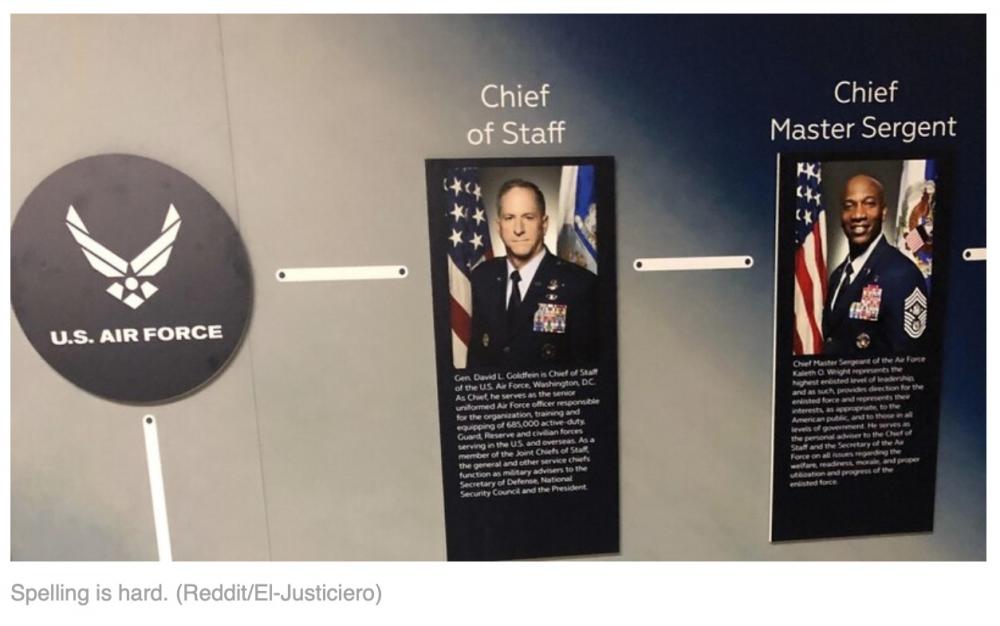 A photo taken at the Ohio museum that first surfaced on Reddit revealed a superimposed — with Scotch tape — photo on top of where Chief of Space Operations Gen. John Raymond’s official photo should be.

The image of Naird also came replete with a biography that replaced Raymond’s.

“The U.S. Space Force is responsible for providing resilient, defendable and affordable space capabilities for the Nation and the Joint Force. It is the duty of the U.S. Space Force to protect the interests of the Unites States in space; deter aggression in, from, and to space; and conduct prompt and sustained space operations.”

Exactly how long Carell’s image has blanketed Raymond’s is unknown. Another error captured in the image led some to believe that Carell’s disinclined facial expression could remain for some time.

Even knuckle-dragging Marines manage to get that one right on occasion, 'rah?

Museum staff, however, did manage to address any slip-ups after discovering the stunt, according to Museum spokesperson Rob Bardua.

Bardua called the image “an attempt by museum employees at a creative and humorous prank done while the museum is updating exhibits during the time it is closed as a public health precaution.”

The picture now correctly displays Gen. Raymond, Bardua said, adding that the staff has since corrected the spelling of “Sergeant” as well.

Things get fixed. Folks get a laugh. Everyone wins.

The first trailer for “Space Force,” meanwhile, finally arrived earlier this month, and between moon cammies, a failed rocket launch that costs “as much as four new middle schools,” and a Carell meditation that turns into a sing-along of “Kokomo” by the Beach Boys, it does not disappoint.

The show — co-created for Netflix by Carell and Greg Daniels, the man who brought us the American version of “The Office” — centers on the exploits of the museum-featured Naird (Carell), a decorated pilot who once had lofty dreams of leading the Air Force.

“It has always been my dream to command a service branch,” Naird says excitedly in the trailer, seconds before unraveling at the news it would be Space Force he would be leading.

Space Force’s mission is “to defend satellites from attack” and “perform other space-related tasks ... or something,” the show’s teaser trailer says.

The release of the 10-episode season coincides with Netflix’s impending loss of Carell’s iconic sitcom, “The Office,” which is expected to move over to NBC’s soon-to-launch streaming platform, “Peacock.”

Watch the trailer below:
https://youtu.be/bdpYpulGCKc