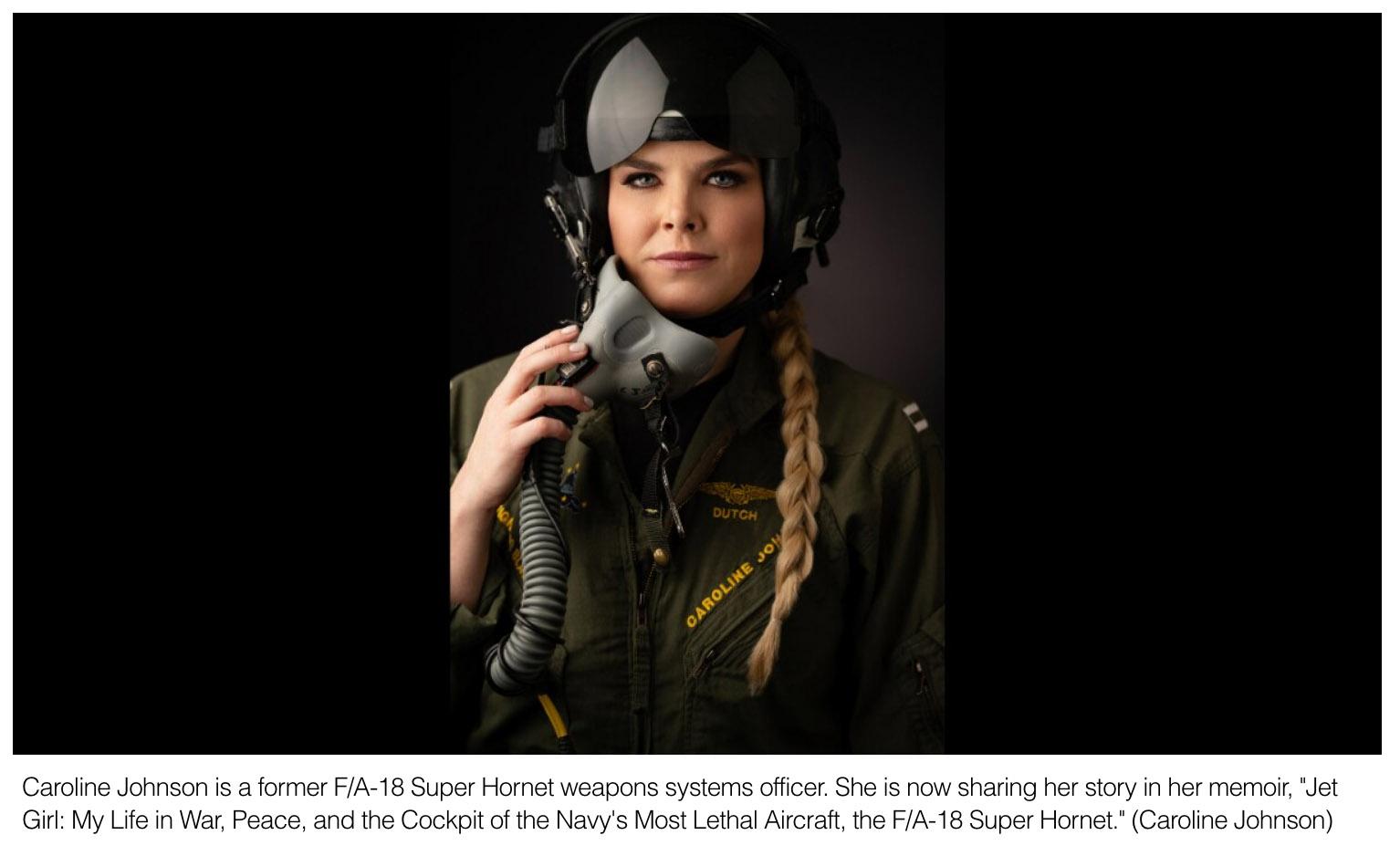 There’s no room for nerves in the cockpit of F/A-18 fighter jets, according to former Naval flight officer Caroline Johnson, who participated in combat missions flying over Afghanistan, Iraq and Syria.

“You’re so focused, you don’t have time to be scared, and think about getting shot at doing these different things,” Johnson, who now serves in the Navy Reserves and is a professional speaker, told Military Times.

As a weapons systems officer in the Navy, Johnson was the one in the cockpit of the two-seater F/A-18F targeting the missiles and bombs.

During the course of the 42 combat missions she flew in 2014, she became one of the first women — if not the very first woman — to drop bombs on the Islamic State over Iraq.

Now Johnson is sharing her story with others in a memoir released last month called “Jet Girl: My Life in War, Peace, and the Cockpit of the Navy's Most Lethal Aircraft, the F/A-18 Super Hornet.”

Life as a Naval Officer
After graduating from the Naval Academy in 2009, Johnson headed to the so-called “cradle of Naval aviation” at Naval Air Station Pensacola in Florida where she excelled and was consistently the top of her class during multiple levels of flight school.

“I went down to flight school and I fell in love with flying,” Johnson said. “I just loved it. It was a challenge. It was exciting.”

By 2011, it became increasingly clear that Johnson wanted and was suited to fly F/A-18s. In particular, one of her mentors guided her and told her she had the skills and personality required to fly the jet.

Fast forward to Valentine’s Day 2014, and Lt. Johnson was departing Norfolk aboard the USS George H.W. Bush with her squadron, the VFA-213 Fighting Blacklions.

Supporting Operation Enduring Freedom in Afghanistan is what Johnson and others from the USS George H.W. Bush Carrier Strike Group had prepared for ahead of deployment. But by June 2014, the aircraft carrier was traveling through the Strait of Hormuz to support Operation Inherent Resolve in Iraq and Syria to combat the Islamic State.

Initially, Johnson and others conducted reconnaissance and intelligence gathering in their jets, allowing her to witness from the air some of the horrific acts ISIS was committing on the ground.

Although Johnson was eager to take action and bring justice to ISIS victims, it wasn’t until August that President Barack Obama authorized the use of lethal force against ISIS. After the first mission striking ISIS on August 8, she was hungry to get into an F/A-18 and become the first woman to strike ISIS.

Hours later, she had her chance to do just that.

In the backseat of the F/A-18, she unleashed two GBU-54 Laser-guided JDAM bombs targeting two ISIS-controlled armored personnel carriers, and a laser-guided maverick missile on an up-armored Humvee with a mounted rocket launcher.

“No matter how many times the weed comes back, we can’t stop taking action,” Johnson wrote in her book. “We must continue to save the lives of those threatened by ISIS.”

Altogether, Johnson killed 16 ISIS insurgents in action and racked up nearly 250 combat flight hours — all with 50 pounds of flight gear weighing on her in the fighter jet’s carbon fiber seats.

“It was more physically and mentally challenging than I ever could have imagined,” Johnson told Military Times about executing combat missions. “You don’t think sitting in a cockpit is physically challenging. But it’s one of the most grueling, painful experiences.”

What’s it like being a woman in the F/A-18 community?
Roughly 18 percent of active-duty personnel in the U.S. Navy are women, according to a Pew Research Center analysis based on Pentagon data from 2015.

Among the F/A-18 aviators that number significantly drops. A Navy Retention Monitoring System report from 2014 shows that only 1.7 percent of the fighter community was made up of women while Johnson was a weapons systems officer.

As a result, Johnson said she developed close friendships with the other women alongside her from her days as a midshipman, to when she was assigned to the Blacklions.

“There’s so few women going through it with you,” Johnson told Military Times. “You start to form these bonds and these friendships and they go way back.”

In fact, Johnson and her close friends in the aviation community had a nickname to describe themselves: the Jet Girls.

One issue Johnson was forced to navigate was feeling alienated from her male-dominated squadron. When Johnson first joined the Blacklions, she expected it would take time to acclimate and not be viewed as the new person.

But things didn’t change. She recounted how another junior officer once told her that “cleaning is a woman’s job” as she detailed a series of “microaggressions” she experienced in the squadron.

After returning from deployment, Johnson said she became increasingly depressed and felt more isolated — especially after losing the friendship of a fellow Jet Girl in her squadron. It was a “dark, deep-down” depression where she would imagine scenarios where she would step in front of a speeding car, she said.

Opening up about these struggles was important for Johnson in order to encourage other service members who were battling depression.

“I had to share because I’d gotten in a really dark place and I didn’t get help for it because that was not part of our culture,” Johnson said.

The Pentagon announced in September that the number of active duty service members who are taking their own lives is increasing. According to the Pentagon’s 2018 Annual Suicide Report, 325 suicides were reported in 2018 — 40 more than in 2017.

“For those who are going through struggles right now, I want them to know that it happens to everyone,” Johnson said. “And they are strong and they have the courage to overcome it. But also don’t be afraid to reach out for help.”

The Veterans and Military Crisis Line offers service members and their families 24/7 confidential support. They can be reached by calling 800-273-8255, via text at 838255, or via online chat.

Fighting for the Jet Girls
Although it took some time, Johnson came to the realization she needed a change of pace after she increasingly felt like she was being “iced out” from her squadron. The situation prompted her to explore other available options — including returning to the Naval Academy.

It wasn’t easy. According to Johnson, the most challenging decision involved in her military career was to leave the F/A-18 community and teach midshipmen instead. The move wasn’t a normal career choice for someone who flew F/A-18s, and she knew that.

“Deviating from that, and the consequences that came with that were heartbreaking because, I kind of knew it was a chapter being closed on my flying career,” Johnson told Military Times. “Like you mourn the death of somebody, you have to mourn that, and so it was really hard, and I lost the support network of being in one of the F-18 hubs.”

But working as a leadership instructor and director of aviation operations at her alma mater was the “most rewarding experience” of her career, she said.

There, Johnson became an advocate for women in the aviation community. For example, she recounted in the book a conversation she had with the commander of Naval Air Forces — a three-star admiral known as “Airboss” — in 2017 about gender discrimination women in naval aviation encounter.

In that conversation, Johnson told Airboss that women are systematically subjected to different treatment in comparison to male counterparts.

The study showed that female aviators typically encountered these negative incidents at higher rates than other female officers serving in other areas of the Navy.

Although the survey is more than 20 years old, Johnson said not much had changed since 1996. In fact, Johnson said she herself had been subjected to each of the negative behaviors included on the list during her time with the Blacklions.

Ultimately, Johnson asserted that the culture in the aviation community must change — something that starts with the top leaders.

“‘Leadership must advocate for its women; mentoring, sponsoring, and grooming them like they would their white male counterparts...The jet doesn’t know or care who is in the cockpit. The jet only cares that people in the cockpit perform at the highest level,’” Johnson told Airboss, according to the book.

Despite the struggles she encountered in a male-dominated fighter jet community, Johnson noted there are many aspects of the military that are equal among men and women. In fact, the Blacklions now has a female commanding officer, Cmdr. Leslie Mintz.

“It is one of the most equal career paths that you can choose,” Johnson told Military Times. “You know, equal pay, equal responsibility. It’s an amazing job. And I’m here to tell you that you too can do it.”

Her message to other women considering joining the military? Check it out.

“It looks like you and the military is a very open place, and it’s becoming better all the time,” Johnson said. “There are women who’ve gone ahead of you who have paved the way, and we’re here to support you on the backside.”