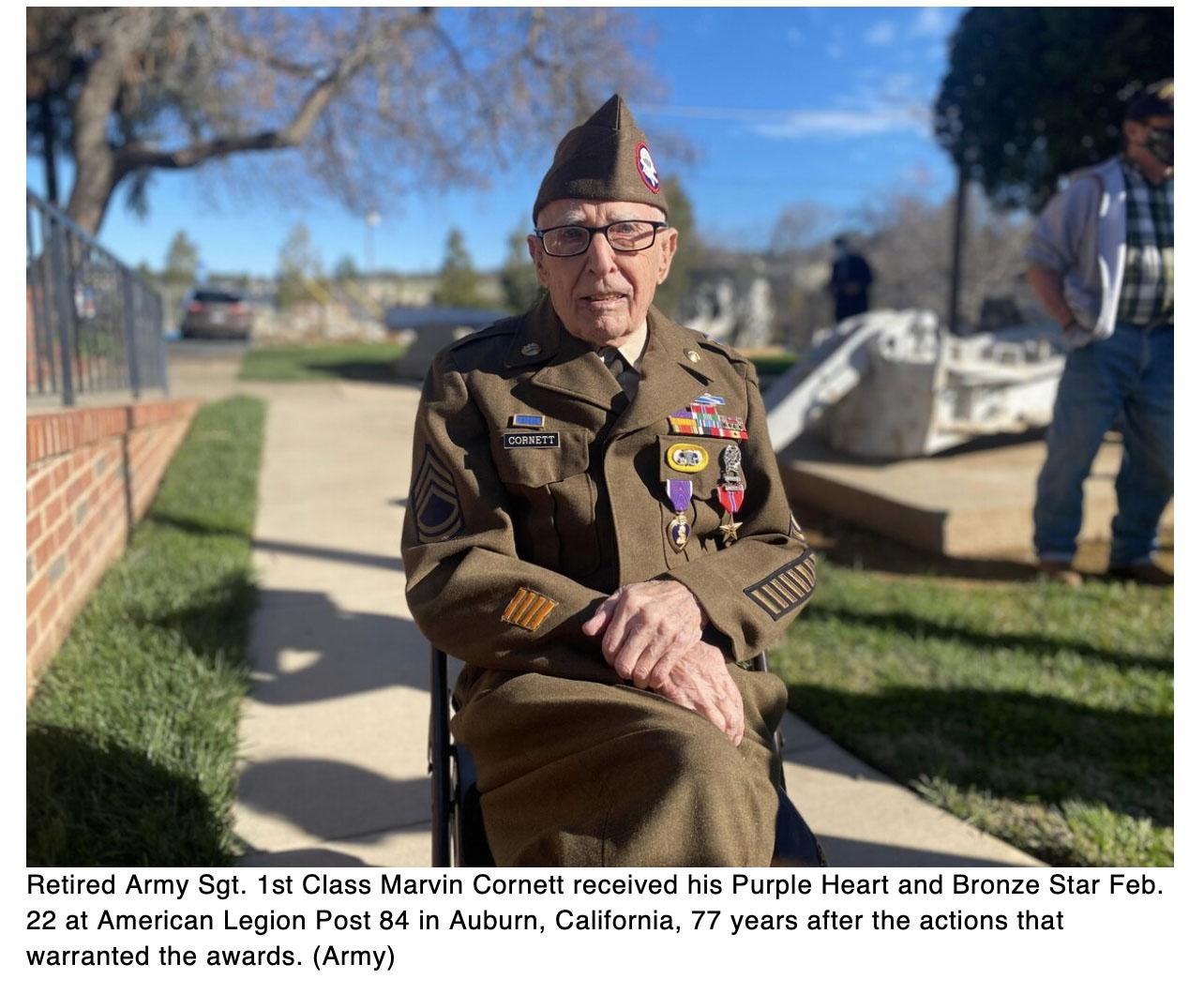 Shaky but sturdy, retired Sgt. 1st Class Marvin Cornett stood tall in a uniform he hadn’t worn in more than half a century to receive an overlooked award he’d been due since 1944. 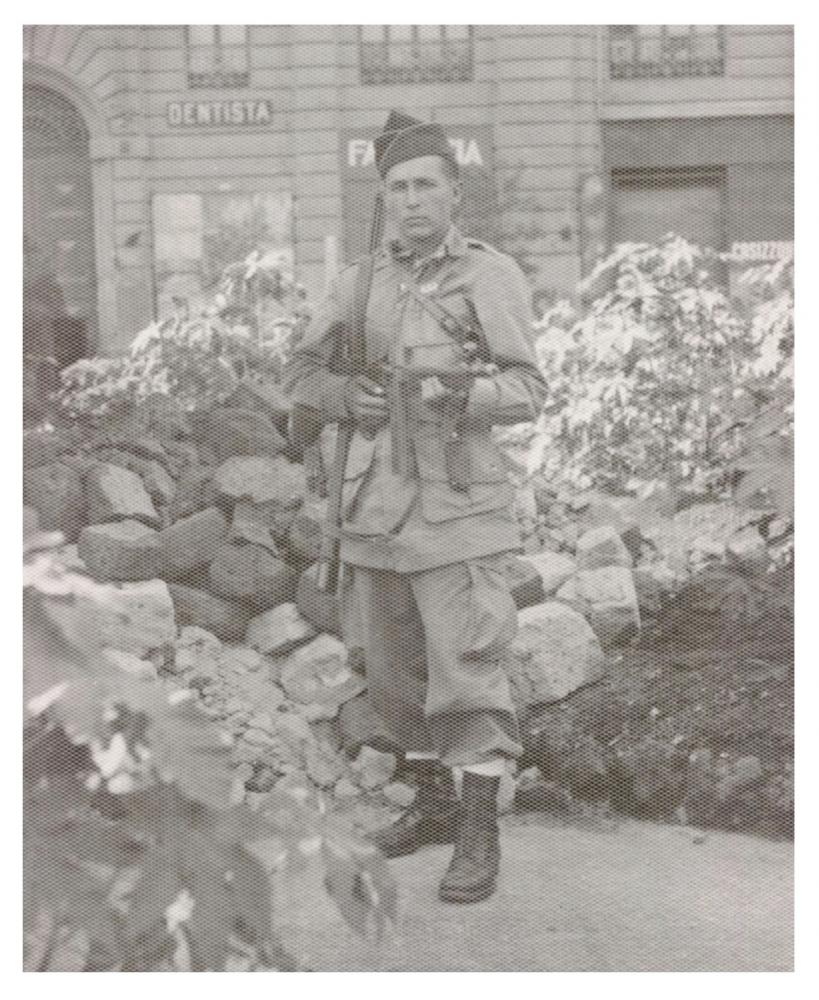 Marvin Cornett, 99, pictured here after receiving medals due to him during his World War II service. (Cornett family) 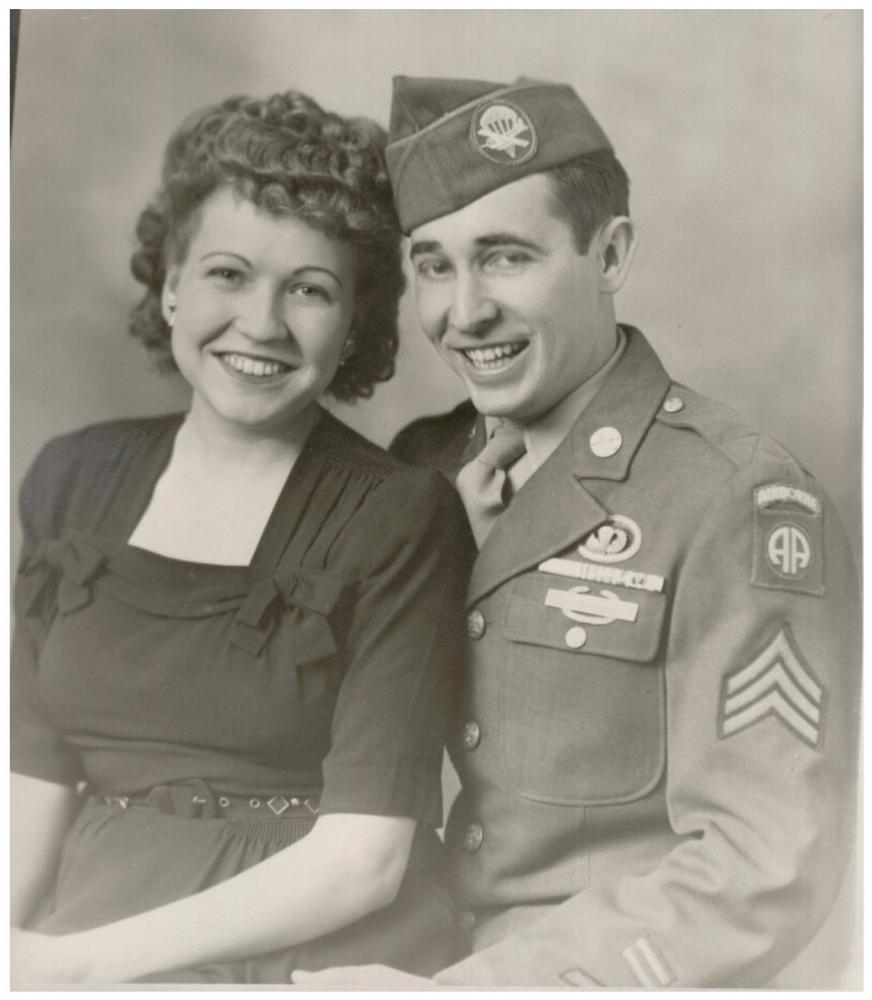 Eloyce and Sgt. Marvin Cornett. The couple met while both served in the Army at the end of World War II. (Cornett family) 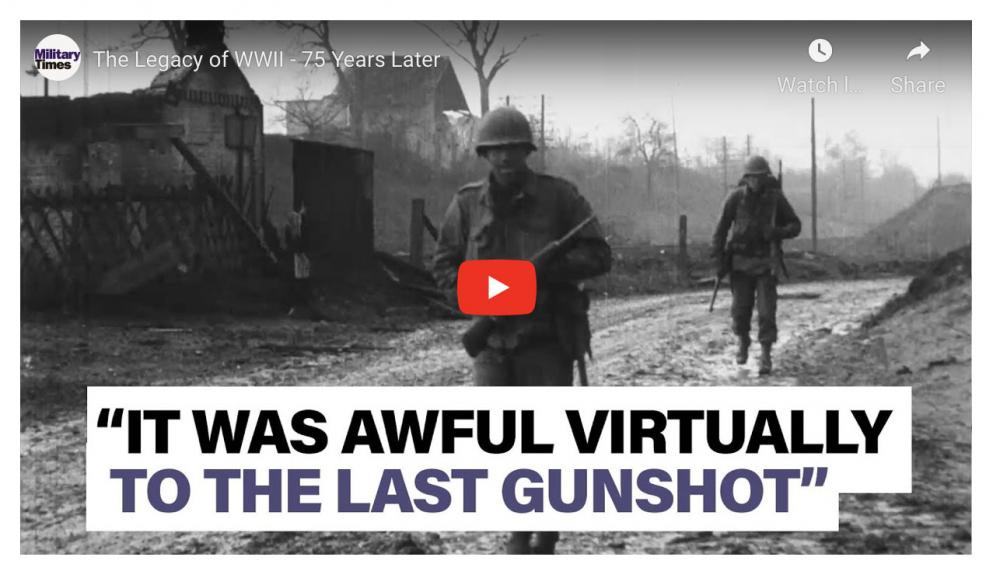 Donning his “Eisenhower jacket,” a green, waist-length jacket worn by the famous general in the later stages of World War II, a garrison cap and matching trousers, Cornett was the center of attention at American Legion Post 84, in Auburn, California, Monday for an outdoor ceremony in which he finally received his Purple Heart and Bronze Star Medal.

Cornett, 99, came in not an inch shorter or a pound heavier than in his fighting shape of three-quarters of a century past, when he stood 5-foot-2-inches tall and carried 110 pounds on his frame.

More than 77 years ago, after having helped capture Sicily, completing a nighttime combat jump in the rain and seeing heavy combat during the Allied invasion of Italy, Cornett was wounded during a combat assault at Anzio on Jan. 31, 1944, which pulled him from the front lines.

His wounds, severe enough to send him home, were listed in unit paperwork. But in the blur of wartime bureaucracy, they were lost.

Members of the 82nd Airborne, along with other active duty and retired military members, were on hand to see Cornett get the awards he was due at the outdoor ceremony in California. Maj. Gen. Christopher Donahue, commander of the 82nd Airborne Division, spoke with Cornett on a remote video call during the ceremony.

Recounting Cornett’s wartime and post-war service — along with the anecdote that until a few years ago, the man still regularly did 100 pushups a day — Donahue made an offer.

“If you want to come back, come on back,” Donahue said. “We need men like you.”

After his injury, Cornett was sent back to Fort Benning, Ga., to serve as an instructor at the Army’s Airborne School. It was there he met and fell in love with a new kind of soldier, Eloyce Miller of the Women’s Army Corps, who’d come to the base to work as a rigger, packing parachutes for the airborne training school.

He had recently bought a surplus Army Harley Davidson motorcycle.

“My mother saw him on that and that was it,” Cornett’s daughter, Jan Mendoza, told Army Times.

After three months courting they married, and shortly after the war ended he left the Army. But not for long. Cornett returned to uniform in 1947, serving mostly in motor transport and later recruiting while raising a family before retiring in 1968.

He’d joined the Army in early 1941, before the Pearl Harbor attacks, leaving his coal mining, eastern Kentucky home to see the world, live in Europe and eventually settle in California, where he went on to a second career with the California Highway Patrol after the Army.

Mendoza said her father did 100 pushups and ran six miles a day before sunrise for most of his adult life. He proudly flew an 82nd Airborne Division flag in front of their home, wore a hat and planted a fresh division bumper sticker on his car to honor his storied unit.

But details of his service were always hard to come by.

Mendoza knew he’d been in World War II. She knew that her parents had met in the Army and her mother was a soldier, too. But beyond that, not much else.

“He never talked about World War II,” she said.

She and her older sister didn’t even know what medals her father had received until a few years ago when he had to enter assisted living and after their mother passed in 2017.

They found a green Army footlocker with his parachute jump pants, a Nazi sword, bayonet from the Italian Army and a Nazi belt buckle, all souvenirs from his time in combat, and a box of medals.

“I had no idea what he had,” Mendoza said.

Mendoza had done work in media and years before had sat both of her parents down, asking them to write their own life stories.

She then gathered video footage, still images and interviews, along with her own narration, to make a short online documentary she put on YouTube titled “The Green Box: A Paratrooper’s Story.”

And that seemed to be the end of it. A fitting way to wrap up her parents’ service and story.

Until, looking around online last year, Mendoza came across a video about the women parachute riggers. It had been put together by retired Army Lt. Col. William Lynn, who now runs Heritage Arsenal, a military museum consulting company.

The two connected on the shared history between Mendoza’s mother and Lynn’s online project.

Mendoza told Lynn about her father’s decorations. But one seemed to be missing.

She knew her father had been wounded in combat and that was why he was sent home. He’d even gotten assistance from the Veterans Administration when his injuries nagged him later in life.

But there was no Purple Heart in the green Army box, nor the ribbon on his still-fitting uniform.

With Lynn’s help, she submitted a claim for the award, but it was kicked back, requiring more documentation.

Lynn knew that the day’s actions and status of troops often was reflected in a unit’s “morning report.”

That document, if they could find it, might show the injury.

Another paratrooper, also a veteran of the 82nd Airborne, who does military research for books found the report naming Cornett as having been injured in the mortar attack. With that and other documents, they reapplied and made a few calls to key leaders.

Mendoza had told her dad late last year that she was pursuing it. He appreciated her concern but had accepted long ago he’d likely never see that award.

A man next to him in the attack had died. Who was he to get a medal for surviving?

In addition to the Purple Heart, Cornett also merited the Bronze Star for having earned a Combat Infantry Badge during the war. That was an official decree made in 1947, nearly two years after he’d left the service the first time.

After a nearly an eight-decade delay, surrounded by his children, grandchildren and great-grandchildren, both medals were pinned to his chest on a sunny California day.

His daughter, Jan, offered a short comment on her father and these long-overdue awards.

“Like many combat veterans who had buddies who didn’t make it home, he didn’t think he deserved it,” she said. “Daddy, you deserve it.”