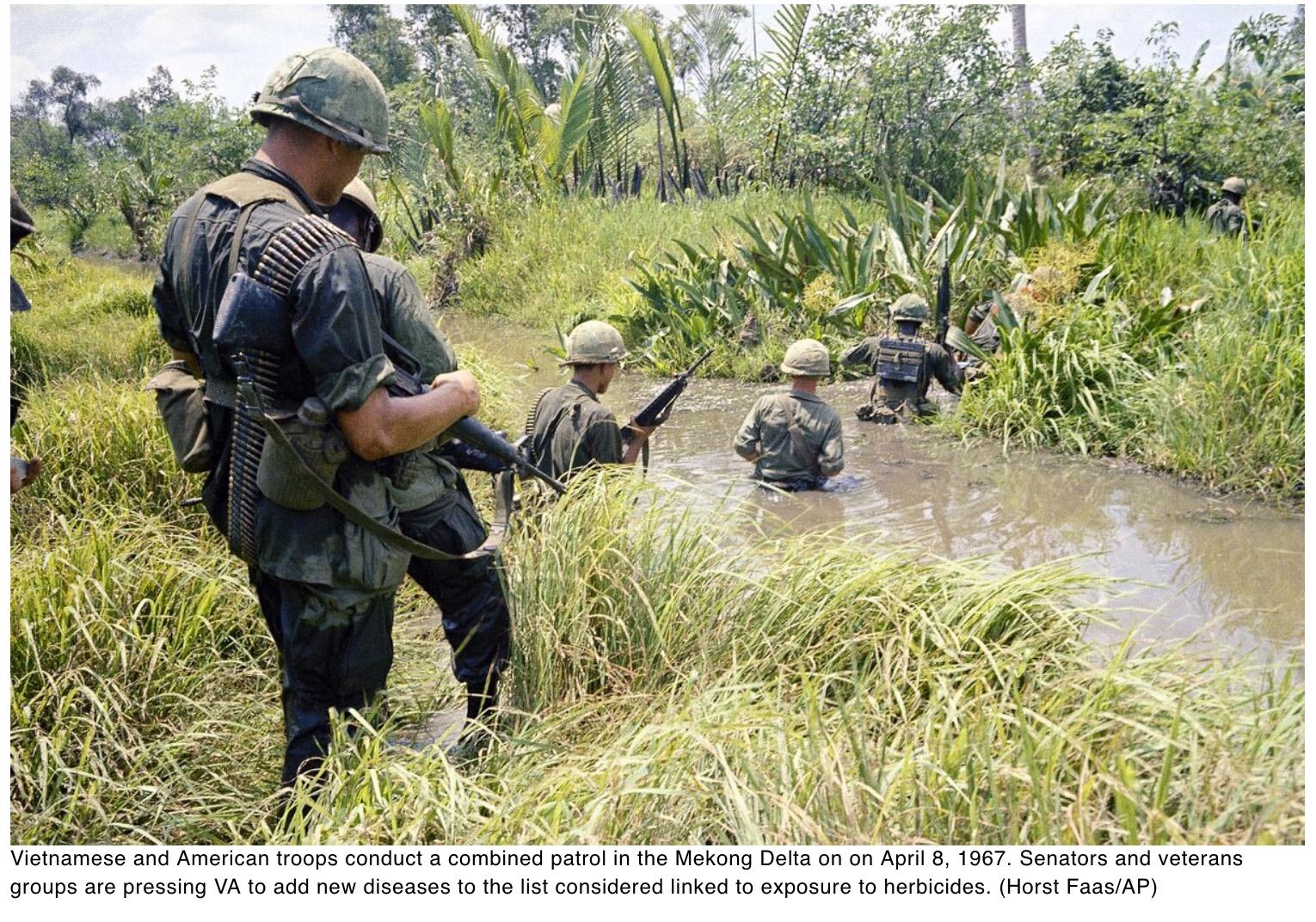 Veteran advocates and Democratic lawmakers are ramping up pressure on the Donald Trump administration to decide whether to add new illnesses to the list of diseases presumed linked to herbicide exposure.

More than 40 senators, including Senate Majority Leader Chuck Schumer of New York, and seven veterans’ and military groups sent letters to President Donald Trump this week imploring him to designate four diseases as related to Agent Orange and other defoliants used during the Vietnam War.

The senators said the administration’s delay in announcing a decision on how to designate the four ailments — bladder cancer, hypothyroidism, Parkinson’s-like symptoms and hypertension — “continues to deny 190,000 sick and aging veterans the health care and compensation they have earned and desperately need.”

“More than 50 years after their service and sacrifice, these veterans continue to suffer the detrimental effects of their exposure each day,” lawmakers wrote in a letter to Trump Wednesday.

On Monday, veterans groups, including Disabled American Veterans, Veterans of Foreign Wars, the Military Officers Association of America, Paralyzed Veterans of America, AMVETS and the Fleet Reserve Association wrote the president to protest a Department of Veterans Affairs decision to delay the announcement on the health conditions until two VA studies are complete and ready for publication.

According to Wilkie, the National Academies’ scientific panels producing the reports did not identify any “definitive causal links” between Agent Orange and the diseases, and at least two — hypertension and bladder cancer — have other risk factors besides herbicide exposure, like age, diet and tobacco use, that can contribute to their development.

The veterans organizations say VA is applying a higher standard for qualification than those that were applied to diseases already on the list.

“The misleading statements made by VA in its recent report to Congress cannot overcome the strength of the assembled scientific data and the statutory framework for adding presumptive diseases associated with Agent Orange exposure,” the groups wrote.

In reports published in 2016 and 2018, National Academies researchers said evidence suggests that bladder cancer, Parkinsonism and hypothyroidism are associated with exposure to defoliants and sufficient evidence exists to demonstrate a link between hypertension and Agent Orange.

But because several of these illnesses are also linked to age and lifestyle, VA has decided to wait until the results of the Vietnam Era Health Retrospective Observational Study, or VE-HEROES, and the Vietnam Era Mortality Study are complete and analyzed. That is expected later this year.

“The soonest the secretary would be able to consider adding any new presumptive conditions is in late 2020,” Wilkie told Congress.

According to VA, the cost of providing health care and benefits to affected Vietnam vets or their survivors could run between $11.2 billion and $15.2 billion, depending on interpretations of a court ruling relevant to the issue.

VA already is treating some Vietnam-era veterans for the listed conditions, including 1,404 for Parkinsonism, 5,836 for bladder cancer, 15,657 for hypothyroidism and 308,329 for hypertension.

But according to VA data, the decision to add the conditions could add nearly 191,000 veterans to the disability benefits rolls in the first year and as many as 2.1 million veterans or survivors over five years.

The Agent Orange Act of 1991 required the VA secretary to grant presumptions for diseases prevalent among Vietnam veterans if scientific evidence showed an association between herbicide spraying and an illness. The statute did not require there to be definitive proof that the defoliants caused the diseases.

But the law expired in 2015. Now, the VA secretary has the authority to make presumption decisions under a separate law but he no longer has to adhere to certain standards, including following NASEM recommendations.

When the law expired, then-Veterans Affairs Secretary Robert McDonald sought an extension as well as funding from Congress to cover the cost of adding the new diseases to the presumptions list. At the time, veterans advocates voiced concern that without the law, future secretaries would have no deadline for making a decision.

It’s been three years since former VA Secretary David Shulkin said he made a decision on the proposal but never announced it.

According to documents obtained by Military Times last year, White House advisers and the Office of Management and Budget cited the law’s expiration as well as concerns about the cost and the evidence, to ask VA to provide additional scientific proof supporting any connection.

The veterans’ organizations argue cost should not be a decision-breaker.

“When taking all of this into consideration, it appears VA is not waiting on additional science, but continuing to stonewall and delay adding these four diseases based in part on monetary concerns. This is troubling,” they said.

The arguments against adding the conditions are the same as those used by VA leadership to thwart extension of Agent Orange benefits to ill service members who served on U.S. Navy and Coast Guard ships stationed off the coast during the war.

Wilkie told lawmakers VA planned to wait for results of the pending studies, which at the time he said were expected to be released in 2019, before deciding whether to accept claims from these “blue water” Navy Vietnam veterans.

In their letter, Schumer, Sen. Jon Tester, D-Mont., and 41 other Democrats said it is time for the administration to stop “stonewalling” these benefits for veterans.

“It is well past time for your Administration to acknowledge the considerable effects service has on one’s health and accept that Agent Orange exposure is most certainly a cost of war,” they wrote.