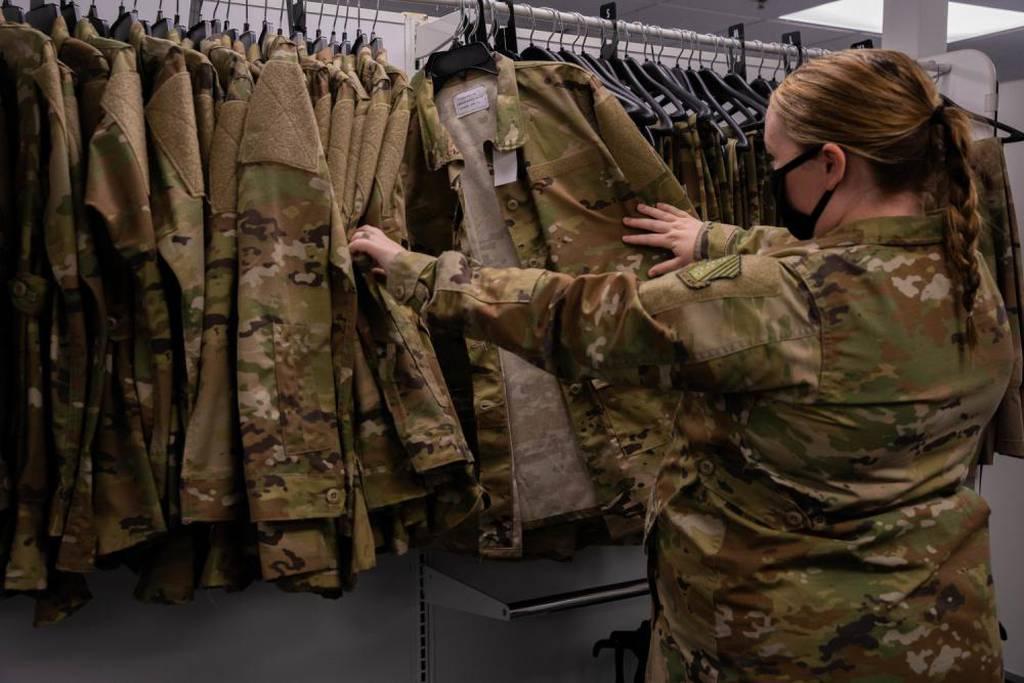 The “Sword Athena” policy team pushed the Army and Air Force Exchange Services to expand the availability of operational camouflage pattern and service dress maternity uniforms at stores across the command.

A lack of sizing options is particularly a problem at smaller, more rural bases that don’t host big clothing sales or sell as many uniforms as their larger counterparts.

Previously, all but one ACC location offered a single maternity OCP uniform per size for pregnant airmen to try on — if it was in stock at all. Then customers needed to order their clothes from the AAFES website.

Women have resorted to footing the bill to ship various sizes from other bases, sometimes overseas, so they can try them on and return what doesn’t fit.

“Usually there is a network of ladies who find other ways to acquire these items, but it is hit or miss,” Master Sgt. Aubrey Woodworth, assistant superintendent of the 97th Intelligence Squadron at Offutt and a mother of five, said in a release. “If you’re the first airman in your unit who’s been pregnant in a while, it makes it even more challenging.“

Other problems arose at exchanges that the Air Force itself doesn’t manage.

“Some locations were joint bases where the exchanges were run by another branch, so their inventory was not populating on Air Force lists,” said Andrew Weaver, vice president for community outreach at AAFES.

Those installations sold at least 50 maternity uniforms in the past year, the Air Force said.

“The service dress maternity uniform program was also expanded to all ACC bases, which now have at least one size available for fitting,” the service said.

AAFES has added a size chart to its online uniform listings as well, so airmen don’t have to rely on in-person try-ons to figure out what to wear.

It’s the latest shift in a series of updates to better support female airmen in their personal and professional lives, such as redesigning body armor to properly fit women, allowing Bluetooth-enabled breast pumps in secure facilities and changing hair regulations to be more health-conscious. At the time of this writing, the Air Force hasn’t provided any updates on an effort launched in 2020 to develop maternity flight suits for female aviators.

Pandemic-era supply chain woes are complicating matters, however. The AAFES website warns that Air Force service uniform orders are delayed due to shortages of multiple clothing items at the Defense Logistics Agency.

Burlington Industries supplies the polyester-wool blend and smooth wool fabric used in all dress uniforms across the armed services.

The problem isn’t expected to go away anytime soon. The Air Force said production and availability of dress uniforms could take a greater hit starting in July due to labor challenges and pricier materials.

The service plans to ride out the shortage by prioritizing new airmen and guardians and issuing them just one set of service dress clothing, rather than the four shirts and two or three pairs of pants they usually get at basic military training.

“This fabric shortage will also affect the supply of service dress items across the Department of the Air Force,” the service said. “To make sure service members eventually receive their full uniform complement, the DAF will provide the affected active duty BMT graduates a cash allowance in their pay check to buy the missing uniform items as available from [AAFES] when they arrive at their next duty station or school.”

Incoming Reservists will get their missing items once they reach their home unit — while supplies last.