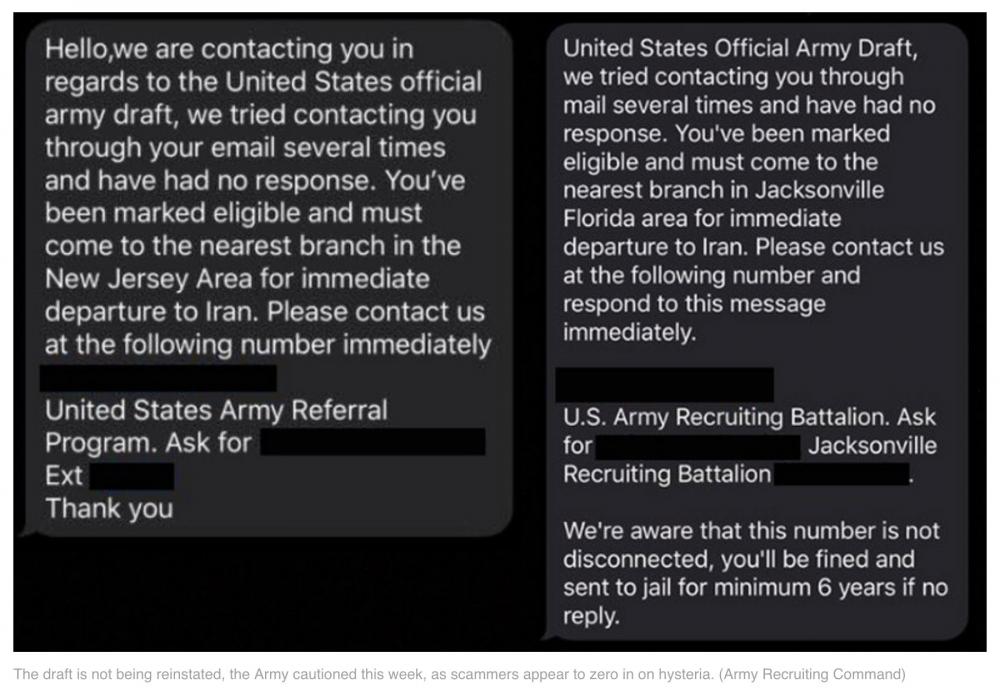 The draft is not being reinstated, the Army cautioned this week, as scammers appear to zero in on hysteria. (Army Recruiting Command)

Fraudulent texts were sent throughout the country this week informing individuals that they have been selected for a military draft, the command said. The phony messages come amid heightened tensions with Iran and after the emergency deployment of 3,500 paratroopers to Kuwait.

Officials have not yet identified the originator of the messages or the reason for sending them. Army Recruiting Command received multiple calls and emails about the fake texts, and although they reference actual recruiting battalions, they were not sent by Army.

“We have forwarded it on to our security personnel and they’re looking into it," Lisa Ferguson, chief spokeswoman for the service’s recruiting command, told Army Times. “We received three screen shots but I’ve heard from several other recruiters and public affairs officials about it as well.”

The texts instruct recipients to first call the sender before reporting to the nearest branch office “for immediate departure to Iran." One of the messages threatened a recipient with a fine and jail time if they did not reply.

The draft was abolished in 1973, and the U.S. military has remained an all-volunteer force since then, though men 18 and older still register for the possibility of conscription. However, registering for the Selective Service does not enlist a person into the armed forces.

Were a draft to actually be enacted, it would be managed by the Selective Service and not the Army.

Army recruiting operations are proceeding as normal, command officials added in their news release on the issue.

Iran vowed retaliation against the United States following a drone strike that killed Quds Force commander Gen. Qassem Soleimani on Thursday night. The Pentagon has yet to provide proof to back up its claim that the strike was conducted to prevent an imminent threat to U.S. troops and diplomats in the region.

The 82nd Airborne Division deployed a brigade of paratroopers to the Middle East last week. An undisclosed number of paratroopers from the 173rd Airborne Brigade Combat Team out of Vincenza, Italy, have also deployed to the region, said Maj. Chris Bradley, a spokesman for the unit.

Army Rangers are the centerpiece of a special operations task force that has been dispatched to U.S. Central Command, as well.

Although memes and social media posts have played on the idea that the United States is inching towards another world war, any potential conflict is likely to remain regional.