Is there any weapon more sophisticated and sought after than a lightsaber? It’s cool, compact, customizable and colorful. Not to mention it leaves absolutely no mess behind when slaying Sith lords or stacking up inept Stormtroopers. 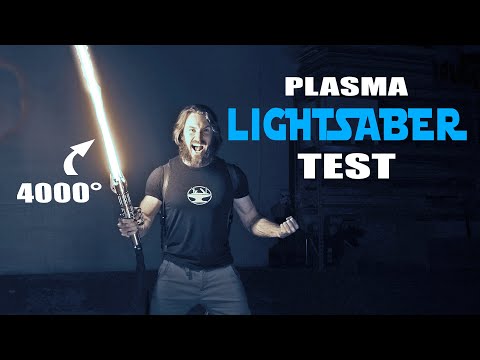 While the U.S. military has previously dabbled in adding Jedi-inspired technology to its arsenal — like the Tec Torch, a breaching tool that can cut through steel — it has yet to fully embrace the power of a plasma, combat-ready lightsaber.

But that hasn’t stopped hobbyists from exploring the possibility.

James Hobson, an aspiring Tony Stark, has for some time now been turning fictional technologies into reality and sharing them via his YouTube channel, Hacksmith Industries.

This 4,000-degree plasma sword is retractable and can slice through Storm Trooper mannequins with ease. The only catch? It currently requires a corded power pack. But Hobson’s team is still iterating.

“There is obviously still a ways to go to make a cordless version just like the movies,” he said. “We are working on our next iteration and ... it’s exciting to say the least!”

The lightsaber isn’t the only weapon Hobson’s crew has explored. His company has developed numerous technologies that’ll leave the intersection of combat and comic book cosplayers drooling, including a Mandalorian jet pack, Captain America’s shield, and Batman’s Batarangs.

Though it will take time, some of these movie-based weapons may one day exist in more places than a galaxy far, far away. Hobson, however, doesn’t believe the lightsaber will be one of them.

“Honestly the lightsaber would be a very useful tool, but wouldn’t make a very good weapon,” he noted.

Whether or not the Defense Department would invest in such badass toys — that’s another story.

According to Hobson, the military has approached him about a few of the Hacksmith inventions, but the discussions didn’t go far, he noted.

“I can’t say who, or what ... it was a few years ago though and nothing ended up going through,” he added.

The classic “If I told you, I’d have to kill you” route.

Alas, it looks like we’ll have to settle for playing out all of our Star Wars fantasies with plastic lightsabers that make incoherent noises until the national defense industrial complex catches up.