After launching a YouTube channel focusing on video game reviews, two special operations veterans have found so much success that they’re fielding offers to work with video game companies. 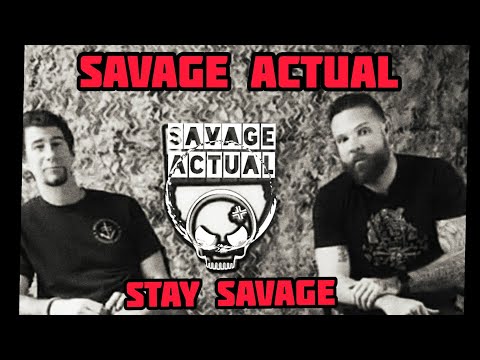 In the seven months since establishing their channel, Savage Actual, these Marine vets have garnered more than 80,000 subscribers. It’s a place where they “share their thoughts on games, movies and more,” according to their YouTube page. “Join us, share a beer and a laugh. Don’t take us or the world too seriously.”

Patrick Moltrup and Jason Lilley first met while working for the company GORUCK, which sells rucking equipment and hosts events that give civilians insight into military field operations.

Moltrup had joined the Corps in 1991, spending time in the Army National Guard before moving to active duty in 2002 as a special warfare combatant-craft crewman for seven years. Lilley enlisted in the Corps in 2000 and served as an 0311 rifleman, a reconnaissance Marine and then a Marine Raider.

The experience of hazing civilians together at GORUCK sparked a friendship in the two veterans that they maintained for years after they left the job.

“It was like getting thrashed in the Marine Corps times 10, I don’t know why anyone wants to sign up for it,” Lilley told Marine Corps Times.

In early 2020, when Moltrup was called by the YouTube channel Gameology for a small part in a series called “Experts React,” he knew exactly who to call.

The two teamed up for six Gameology videos, which quickly garnered millions of views and had the company calling them to do more.

Instead, they decided to come up with their own plan.

“I just called up Jason like, ‘Hey man, we can do this and we can do this better,’ so that’s what we decided to do,’” Moltrup told Marine Corps Times.

Their channel launched on Aug. 6, 2020, and they posted their first video a month later, which featured the two reviewing “Battlefield V” — a game set during World War II.

In their reviews, the two watch video of the game being played, relay their experiences from special operations, comment on the realism of the game and generally just talk about how fun it is... or isn’t.

In addition to Battlefield V, the two have reviewed various editions of “Ghost Recon” and “Call of Duty,“ focusing on first person shooter games with a vaguely modern setting, allowing them to lean on their real-world experiences.

In one video, the two reviewed Call of Duty 4: Modern Warfare All Ghillied Up, while Lilley wore his ghillie suit.

In the video, Lilley, being a MARSOC veteran, talked about a record he set while attending the Marine Corps Scout Sniper Course in 2007 and recalled how he first played that mission on Call of Duty.

“I actually played this before I went to sniper school obviously, this came out a long time ago, lot of fun,” Lilley said in the video.

“[Moltrup] and I are both pretty creative in a lot of ways and we both have so many different ideas trapped inside,” Lilley said. “It’s fun, we are having a blast doing it.”

The duo are scheduled to interview Huntington Beach, California, mayor and former UFC champion Tito Ortiz on the show to discuss his love of Call of Duty, Moltrup told Marine Corps Times.

For Lilley this opportunity marked a second chance at stardom.

His time with the 1st Reconnaissance Battalion during the 2003 invasion of Iraq was immortalized in the book “Generation Kill” by Evan Write, which later was turned into an HBO mini-series by the same name.

When the series was casting, he went out to Hollywood, California, and tried out for the chance to play himself.

“I auditioned to play myself, but I wasn’t good enough,” Lilley said.

But the audition was not in vain. It ultimately led to a friendship with actor and model Kellan Lutz, who played him in the HBO miniseries, and may soon make an appearance on the YouTube channel.

The two veterans hope to interview Lutz on future episodes.

This YouTube channel is a way for Lilley to show the world that even though being part of that platoon was a monumental part of his life, it was not the “apex.”

“I worked for the State Department, I went to sniper school … then I went to art school for photography for a bit, it’s so random,” Lilley said.

“We want to showcase the individual, especially on the interviews and not just the capabilities of that person... There is more to us than just the Marine Corps.”

While Lilley brings famous friends and chaotic artistic energy, Moltrup, who joined the Marine Corps in lieu of going to art school, brings his own creativity, as well as an organizational touch that prevents the channel from going off the rails.

“I think multiple episodes I have to tell Jason, ‘O.K., this is what we’re doing today,’” Moltrup said.

The two balance each other out while still having ample fun in nearly every video they do.

But it‘s not all fun and games.

In January, the two published a video where they reacted to the story of Air Force Tech. Sgt. John Chapman, a combat controller who posthumously was awarded the Medal of Honor for his actions in Afghanistan on March 4, 2002.

The emotional 21-minute video shows the two veterans nearly in tears in as they watch video footage of the fight that led to Chapman’s Medal of Honor award.

“I appreciate the ultimate sacrifice John Chapman gave for our country, what he believes in,” Lilley said at the end of the video.

With the rise of the channel, the two also have taken on a mentorship role, giving advice on what it takes to follow in their footsteps and join the special operations community in the military, along with a realistic take on what lives is like the Marine Corps.

Moltrup said far too many young people join the military with an unrealistic view of what it is from video games and movies and sees his role as one where he can tell the truth and help them prepare before they ship.

“I definitely would encourage any 18-year-old who doesn’t know what he wants to do with his life join the military, but have a realistic view of what you’re facing,” Moltrup said.

Lilley said he sees a lot of himself in the young viewers reaching out to them for advice.

“The call to serve, the call to join something higher than yourself, that’s probably ingrained in these people much like it was for me at that age,” Lilley said.

“You want that adventure so if someone is interested in it, go scratch that itch,” he added.

As for future collaboration with a video game company, Moltrup said they are still in the early stages and cannot disclose much, but he expects to make a big announcement in the near future.