More people are joining the Air Force in their late 30s

Yoko Holdren wants to work. She tried to find jobs for more than a decade but seemingly hit a roadblock at every turn. First it was the frequent moves with her husband, Master Sgt. Donovan Holdren, and the cost of child care for their three kids. 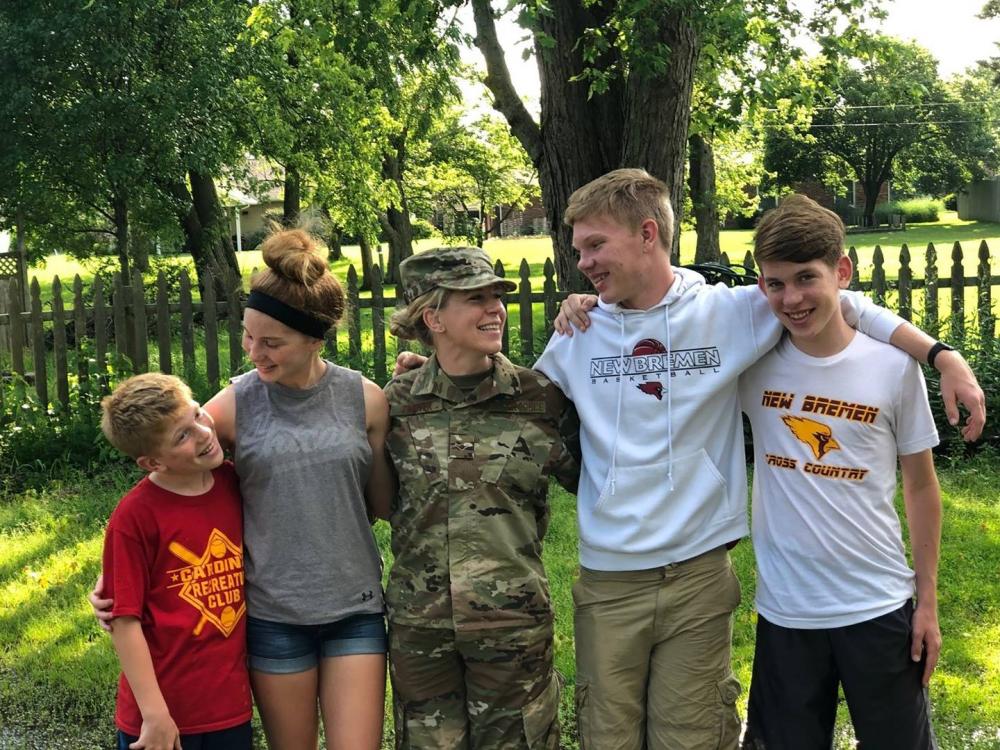 Then-Airman 1st Class Erin Zimpfer, 445th Airlift Wing Public Affairs photojournalist, spends time with her children. Zimpfer started a new chapter in her life for herself and her children when she joined the Air Force right before the cut-off age of 39. (Courtesy photo)

Then it was German employment and citizenship rules at Ramstein Air Base, where the family is stationed. Her green card neared expiration. And, just as she looked to get a job when her youngest son started school, the coronavirus pandemic hit.

Holdren turned to the Air Force and enlisted two weeks before her 40th birthday.

“I thought, ‘If I join the Air Force, they can train me from zero,’” she told Air Force Times. “Whatever job is available, I will take it.”

Now an airman first class in security forces technical school, Holdren is one of hundreds of people who have joined the Air Force in their late 30s since the service raised its age limit for new recruits nearly a decade ago. The career change has offered new challenges and second chances while offering the service another way to grow and diversify the force.

In 2014, the service increased the age cutoff from 27 to 39 for those without prior military service to enlist on active duty. The Air Force Reserve changed its age limit from 34 to 39 as well.

Since then, the active duty enlisted force has brought in 574 operations and support airmen between ages 35 and 39 — comprising just 0.5% of all active duty enlisted airmen over the past eight years, according to Air Force Recruiting Service data. Their interest in joining the Air Force has grown nearly every year, rising from one recruit in that age group in 2014 to 137 in 2021.

The Air Force bars people older than 39 from becoming an officer in most fields, too, though health care and ministry hopefuls can commission into the service until their 49th birthday.

Operations and support officers include 172 active duty airmen who joined at age 35 or older from fiscal 2014 to 2021. That accounts for just over 3% of officers who entered those fields over the eight-year span.

Older officer recruitment is more volatile than on the enlisted side, fluctuating from a high of 61 people in 2019 to a low of two in 2021.

Americans approaching middle age are often drawn to the Air Force for a variety of reasons. Some are parents are looking for something new after starting a family, or people whose dreams of joining the military were deferred. Others find themselves with few options later in life, with or without a college degree; and some reconsidered their future after a major life change.

Zimpfer — born as the sixth of seven children — became the first in her family to finish high school, then got married and homeschooled her four kids as a stay-at-home mom for 14 years. That trajectory changed in 2017, when she got divorced and struggled to make ends meet.

Long inspired by her younger sister’s success in the Air Force after high school, Zimpfer made her own jump into military life. She took her oath of enlistment in February 2018, one month before her 39th birthday.

"It was the quickest way to go from where I was to where I wanted to be, and I really wanted to get a degree and use the education benefits," she said. "Everything fell into place."

While most recruits join the Air Force before their 30s, older airmen have had more time to fully develop their emotional intelligence, work ethic and decision-making skills. That maturity can help them cope with the ups and downs of military life than some of their younger counterparts.

"If you are in your 30s, you have life experiences, and you’re there for a reason," Air Force civilian and former airman Hugo Escobar said in a 2016 video on his YouTube channel, "Your Military Money." "It’s better to … show up to the Air Force party late than never at all."

Escobar and others online who offer anecdotes and advice on joining the Air Force later in life warn that getting in shape and protecting against injuries is key.

Being able to keep up with the physical demands has worried Holdren, a self-described exercise hater who started preparing a year before heading to basic military training.

Still, she said security forces can be a good fit for non-native English speakers like her because it focuses more on physical prowess than on academics.

“They’re saying the test [to become a security forces airman] is easy,” Holdren, a Japanese-born U.S. national, said in November. “That’s good for me … because if I have to take a test in English, maybe I’d have a hard time.”

Seasoned airmen also recommend being mentally flexible, as the military can upend established routines and impose far more rules in daily life than in the civilian world — with younger airmen in charge.

“It was really frustrating to me to be so restricted like the 18-year-olds, when I have a house and bills and I’m responsible, never been in trouble,” Zimpfer said of tech school. “To have that [10 p.m.] curfew, or not being able to stay off-base ... was just something that you had to accept.”

Her decision to leave her four kids, age 11 to 15, with her ex-husband for seven months of training tested her resolve above all else. Yet she faced her fears and shipped out, a move made easier because the children were older.

“I don’t have to worry about my children so much because they’re in school [at Ramstein],” Holdren added of her three kids, age 7 to 13. “I can focus on my job.”

Once they make it through boot camp and technical training, older airmen hope the gamble will pay off.

Joining the Reserve offered opportunities that Zimpfer lacked without a college degree or relevant work history. She’s held jobs in public affairs and finance at Wright-Patterson Air Force Base, Ohio, first as a civilian employee in the service and now as a contractor.

Those connections proved crucial once COVID-19 swept through the United States in 2020.

When she was laid off from her civilian job as a trade compliance specialist for an Ohio manufacturer, Zimpfer called Lt. Col. Cynthia Harris, her Reserve boss at 445th Airlift Wing public affairs. Harris immediately put her on active orders, which led to a job offer at Apogee Engineering.

Down the road, Zimpfer wants to obtain a bachelor’s degree and switch into the human intelligence field with a top-secret clearance.

On top of offering a pathway to higher education, the military’s medical benefits and job stability can be particularly helpful for older airmen who need to support their families. Some work that can be done anywhere, such as base security, can also help keep dual-military couples like the Holdrens together.

Today, she plans to return to Ramstein as a defender after tech school at Joint Base San Antonio-Lackland, Texas. She’s working on a degree in cybersecurity and is interested in pursuing criminal justice as well, with the goal of one day obtaining a master’s degree.

She has no firm long-term plans but said she’ll serve past her four-year contract if she likes her job and remains healthy.

As for Zimpfer, she would love to stay in the Reserve for 20 years.

“I don’t know that it’s right for everyone’s situation, but I’m very happy that I did it and that it worked for me,” she said.