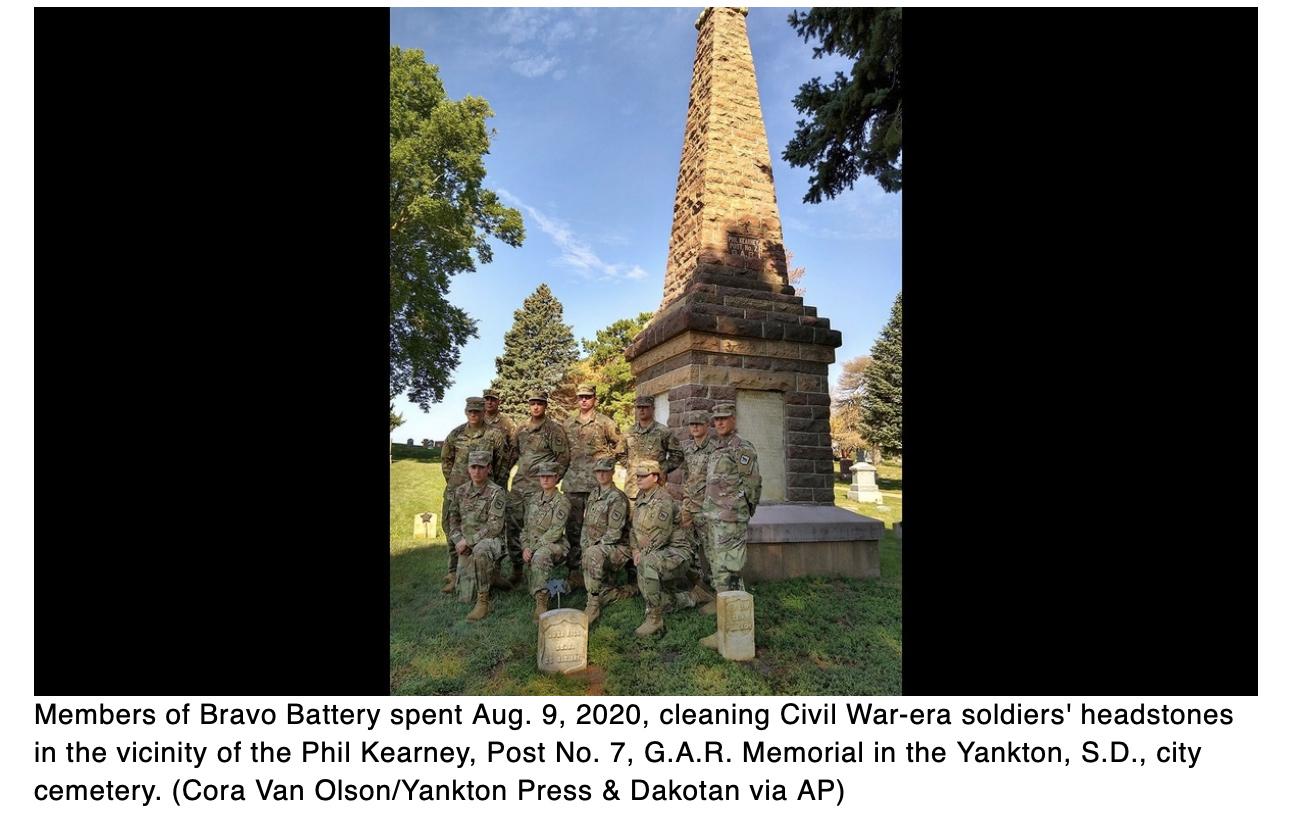 YANKTON, S.D. — On a recent Sunday, soldiers from Bravo Battery took the morning to brush away years of dirt and moss on the tombstones of men who fought in the Civil War, and gained an appreciation of the broader task of honoring all who served this country.

The graves are located in the vicinity of the Phil Kearney, Post No. 7, G.A.R. (Grand Army of the Republic) Memorial in Yankton’s city cemetery.

The idea for the project came from Staff Sgt. Rob Buechler of Bravo Battery, 1st Battalion 147th Field Artillery Battalion of the South Dakota National Guard, who had seen a Facebook video about a man who regularly cared for soldiers’ tombstones — and even developed his own cleaning solution.

“This guy would go on his own time and he would clean soldier tombstones in his local cemeteries,” Buechler told the Press & Dakotan. “So I was thinking, that’d be a nice thing for us to do here out of Bravo Battery at the city cemetery.”

It’s a good thing for soldiers to show their thanks to the community, he noted, adding that Yankton has always supported Bravo Battery, and Charlie Battery before it.

Buechler spotted the memorial on a bike ride through the cemetery and decided to look into a project to clean the gravestones.

“Since we’re doing an annual training here, and it’s not a normal annual training where we go somewhere and shoot rockets, we need things for the soldiers to do for these two weeks,” Buechler said. “So I got permission to do this project.”

Buechler approached Todd Larson of the Yankton the Parks and Recreation Department, who agreed to partner on the project.

“He was gracious enough to purchase all of these supplies for us,” Buechler said. “He said, ‘We’ll purchase everything if you guys provide the labor.’ So I said, ‘Great deal.’ Kudos to the Yankton Parks and Rec Department for helping out with this.”

In addition to brushes and popsicle sticks to detail the writing on the stones, a specialized cleaner, specifically made for use on old headstones, ensured the cleaning process would be safe for the stones.

“This is completely organic, biologically safe, economical and ecologically safe — and it works pretty darn good,” Buechler said. “That and a good amount of elbow grease gets them all nice and clean.”

According to a plaque on the site, the monument was dedicated to “perpetuate the memory of the honored dead,” on June 14, 1894, by the Women’s Relief Corps in honor of the members of the Grand Army of the Republic (GAR) Phil Kearny Post #7.

The site includes the grave of a brigadier general from Scotland and is surrounded by headstones bearing the names and units of Civil War soldiers, many from other states.

In all, Buechler’s group located 27 headstones that belonged to soldiers and were so weathered and covered with moss that they were practically illegible. By the time the group was finished, the stones were clean and returning to their original marble color.

The work seemed to spark an interest in the monument as well as in the soldiers buried there.

“I enjoyed doing this work for the community of Yankton,” said Devon Jongeling, a private first class in the unit. “The headstones are all over 100 years old.”

“We were Googling the names of the soldiers seeing what their history was,” Jongeling said. “That was kind of cool.”

“I honestly, would like to know more about what brought them here — why they ended up in Yankton, whether they’re originally from here or if that was just the unit they belonged to,” added Spc. Samantha DeBlauw.

By late morning, the work was done and the gathered soldiers poured one last coat of cleaner over the headstones to continue the job of removing stains for the next few weeks. Buechler plans to keep up his regular bike rides through the cemetery patrolling for a return of the moss on those headstones.

“If I see moss growing again, I’ll ask for permission to bring soldiers up here again,” he said. “It’s a good way for the soldiers to take care of their soldiers’ gravestones, and to show respect for them.”