The Thunderbirds are back in 2021 with new tricks to perform, after the coronavirus pandemic forced the aerial demonstration team to go dark for most of its 2020 season. 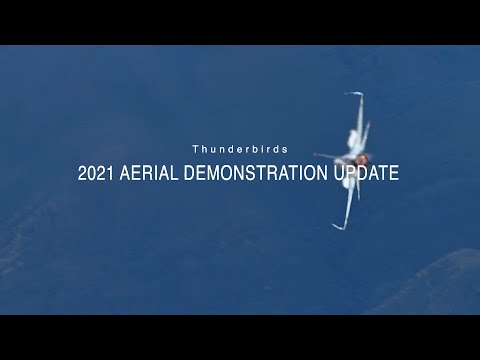 This is the first time in four decades that the team of six F-16 Fighting Falcons has changed its routine, the Thunderbirds said this week.

“With the cancellation of the 2020 air show season, the team focused its efforts on saluting first responders and enhancing the aerial demonstration for fans,” the team said in a video posted to social media.

Condensed into a 50-minute show instead of 90 minutes, the new routine’s formations aim to tell a story of patriotism, American ingenuity, teamwork and inspiration, the service said. Performers hope the show will evoke emotion and better entertain audiences.

As part of the revamped maneuvers, Thunderbirds pilots will add a “stinger break cross,” where one jet loops away from a few others in a plume of smoke, and a “low bomb burst with hit,” where five planes “explode” in a starburst pattern, then zoom back toward each other.

Former Disney employees weighed in on how to script the show to keep crowds engaged again and again, in part by cutting repetitive moves out of the program, The Drive reported Tuesday.

A ground show put on by maintainers is now a more visual experience for the audience as well, adding more physical movement to the routine rather than relying on words.

It’s a more streamlined version of the drill, and “showcases the rapid generation capabilities of maintenance personnel supporting Air Force fighter aircraft during alert situations and combat,” the Thunderbirds said in a Friday release.

The fresh moves debut this weekend at the Cocoa Beach Air Show in Florida on April 17-18. After a quiet 2020, the Thunderbirds now have appearances scheduled through the end of 2022.

“The best action is going to be right there on the show line,” Thunderbirds commander Col. John Caldwell said. “The crowd will feel the thunder in their chest by hearing the jets roar, seeing the speed, seeing the motion, and seeing the precision of our team while flying 18 inches apart and project the power, pride, and professionalism of the U.S. Air Force to the American public.”