A V-22 Osprey conducted its inaugural landing on the new and improved flight deck of USNS hospital ship Mercy Thursday. 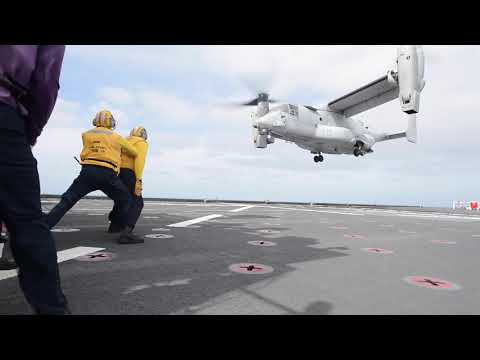 The milestone occurred as the Mercy is in the middle of Dynamic Interface exercise off the coast of Southern California, where it is testing variants of the V-22 Osprey and MH-60 Seahawk for take-offs and landings aboard the flight deck, the Navy said.

The Mercy, which provided COVID-19 relief in San Diego and Los Angeles last year, has undergone significant changes during a seven-month maintenance period in which the ship’s flight deck was expanded and fortified so it could manage large aircraft.

Now, the Mercy has the capacity to accept patients and supplies through aviation platforms, the Navy said. That means those in critical condition will have access to medical treatment faster since they won’t to arrive via a tender boat, according to the service.

“Improving the capability of the ship to support newer aircraft platforms such as the MV-22, allows greater flexibility and enhances the embarked Medical Treatment team’s ability to continue providing the outstanding care they are known for,” Bridgewater said. “This investment in new capability is a great example of MSC’s continued support to the fleet and plays an important role in keeping the U.S. Navy competitive well into the future.”

The service said more than 100 Navy personnel from San Diego, amphibious assault ship Boxer, destroyer Stethem, amphibious assault ship Tripoli, Helicopter Sea Combat Squadron 3 and Helicopter Maritime Strike Squadron 49 are on the Mercy during the exercises to train and assist the civil service mariner crew because such flight operations are new for the hospital ship.

“We accomplished a tremendous amount of work during the repair period, and it’s great to see the ship coming alive again and integrating all of the new systems,” Capt. Peter Nolan, Mercy’s ship’s master, said in the release. “We have a lot of new crew members, and we’re looking forward to the upcoming periods at sea so we can continue working together, becoming a cohesive unit and prepared for any upcoming missions or tasking.”